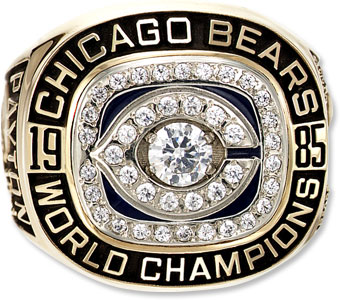 “Look what I’ve got! It’s a Super bowl ring!” I looked up from the checkout line at Costco to see one of the checkers showing off a monstrous gold and diamond ring that is unmistakable to a football fan. I heard her ask the more than six-foot receiver-looking gentleman standing at the next counter what year and he said “1985.” That would make him a Chicago Bear and a member of a championship team that included Walter Peyton, Mike Singletary, Richard Dent, Jim McMahon and William “Refrigerator” Perry.  Their opponents, the New England Patriots, were making their first of many appearances in the big game.

Two teams, who worked and sacrificed and contended for a shared goal and one achieved the prize. I tell you this to ask a few questions I’ve been asking myself recently. What are my goals? What prize am I contending to attain? And what am I willing to do, to give up, to strive with a group of like-minded people to achieve? Or am I just sitting in the stands, watching others?  They feel like good questions to be asking as we head into January and a new year.  I’m just wondering what prize you’re striving for.