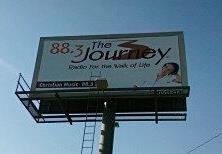 In the next couple of weeks, as you drive around
the area, you may notice a new billboard; at least I hope you will. Beginning
the week of Oct. 21st, five billboards will go up telling people
about 88.3 The Journey.

Their placement
grew out of a conversation I had with a donor after Sharathon who was excited
to learn The Journey had also appeared in September’s station rankings from the
Arbitron Ratings Company. No small feat for a radio station whose signal only
covers part of the Metroplex. That means more people are listening to The
Journey, mainly because you are telling your friends about the Journey, which
is the best way to grow the radio station.

But
this donor thought we should take advantage of the momentum by letting more
people know about the station.  So for
the next six months, he’s contributing $1000 a month for us to put up
billboards to spread the word about The Journey.  With his donation and a few dollars I had in
the budget for marketing this fiscal year, at $300 apiece, that’s five boards a
month.  If you would like to help us
spread the word about the Journey, let me know. Maybe we can put up a few more
every month.