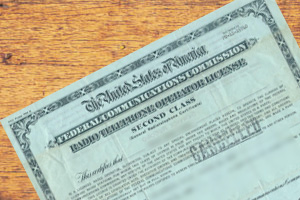 Forty-two years ago, this week, an adrift young man just short of his nineteenth birthday borrowed a friend’s car and drove to downtown Dallas to take a test to receive his third-class radio telephone operator’s license. A couple of hours later, he left the Commerce Building with permit number P3-10-39728, having gotten 38 out of 40 questions right on his first attempt. As I recall, it was the best score I received on any test my freshman year of college. That night, I played contemporary Christian music live on the air for the very first time. I remember Chuck Girard and Second Chapter of Acts in that first shift, because they were my favorites at the time. I still have the salmon colored permit in my office.

I took that test and got my permit to be a radio broadcaster, not because I necessarily wanted to be a broadcaster. I just knew working anywhere else would be better than cleaning toilets in the boys’ dorm. Now here I am forty-two years later, with more than a dozen stations on my resume’, some built from scratch, teaching the things I have learned in the process to the next generation of global communicators.

God knows the plans He has for you. My experience with Him has taught me they are almost always what I least expected. I wouldn’t change a thing about the last four decades. He is so good.